This is the second in a series of posts from Adelaide University’s MBA Entrepreneurship Intensive program.  Professor Becky Ruber has kindly allowed me to sit in on the guest speakers arranged for students in her course.

On Friday the 1st of March, the guest speaker was Mal Chia from NoQ:

Mal Chia is working as the Digital Marketing Manager at the Adelaide startup NoQ.  He has a Masters in Commerce (Marketing) from Adelaide University and is one of South Australia’s most respected digital marketers. Prior to working at NoQ, amongst other things, he was the head of Digital and Social Media at Adelaide University.  Mal’s presentation to MBA students on Social Media Marketing was insightful and had many hints and tips for the Entrepreneurship students.

Mal opened up the talk with some interesting facts that helped to put social media in the right context – a medium that can’t be ignored:

That’s an amazing statistic. From a marketing perspective it means that half of Australia could be reached via Facebook. Unreal. Yet how many businesses have a Facebook presence? Too few.

Mal went on to say that Australia has 30 million mobile phone subscribers (over subscribed?!) and that we have the 2nd highest rate of smartphone penetration in the world.  Our high take-up rate is an opportunity for savvy businesses to exploit, and this reminded me of a quote by Zuckerberg, that if Facebook was invented today, it would be an App (instead of a website).  People are expecting to do much more with their phones than ever before, and Australia is one of the countries leading that charge.

The end of traditional mediums?

The Internet and the rise and rise of social media has fundamentally changed the way companies can communicate and engage with the outside world. As Mal put it-

“Traditional broadcast is on life support”

It’s a strong statement, but Mal backs it up with a brief history lesson. Traditionally, the ability to broadcast to the masses was held under tight control by people with a lot of money. If you wanted to start your own TV station, or run your own printing press or radio station, you couldn’t do it, it was too hard, too expensive. In Australia we had the situation of “very few, servicing very many”. Mal’s point is that social media has disrupted the monopoly of reach to the masses – now anyone can be a publisher and reach many.

“We are all publishers”

An interesting point raised by Mal was the idea that social media is nothing new – that it is the oldest form of communication in the world:

“Chatting to your neighbour over the back fence for example, is primitive social media”

It’s just that the magnitude of reach has changed, amplified.

We all have the ability to speak and communicate with a wide audience, and can do so very cheaply because of social media and the internet.

Because of this, you no longer need to pay to get access to someone else’s audience.  Businesses should be taking advantage of this.

With minimal cost, you can seek out and :

Build your own audience

Mal says that you can use a variety of techniques to find your audience and market directly to them. It can be as simple as using google. A more advanced technique was to identify key influencers in your target audience (people with the most number of connections to audience), and then try to get their attention. However, social media marketing has a different twist to regular marketing – social media is all about what your audience wants to hear, not what you want to tell them.  If you get it wrong, they’ll turn away.

Mal’s thoughts mirror what was taught by Cullen Habel in the Adelaide University – Executive Education Unit’s “Sweet Tweets” short course. Successful bloggers need to provide value to their readers, and to do this, effort must be made to understand the blog’s audience, and their needs.

One of Mal Chia’s final points was how the Internet is becoming increasingly visual and that you can no longer rely on text to be effective on its own. Include more photos inline with text, and explore newer ways to present information in pictures or with video.

“Youtube is the second most used search engine in the world”

Mal wrapped up the talk by saying – you need to think how you could create a community around what you are doing. How can you give them something to remember you by?

“What sort of content can tell a great story about what your business is? ….What your story is?”  - Mal Chia

The talk covered everything above in more detail, and a few areas I haven’t mentioned. It was great talk that has me thinking about how I operate MBANights, and how I could do it better.  More importantly it gave me an insight into what is required to have a successful  social media campaign.

Thoughts on how to be successful at social media? Comments? Hit me up below! 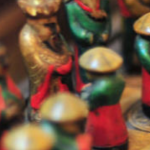