UniBreakfast with Assistant Governor of RBA

Adelaide University has arranged for Dr Guy Debelle of the Reserve Bank of Australia to speak at an exclusive breakfast seminar, part of their UniBreakfast series of events. Dr Guy Debelle works as the Assistant Governor (Financial Markets) at the RBA bank, so it will be very interesting to hear what he has to say. You can read more on him here.

The headline for the event is :

“Hear about the effect of the exchange rate on the economy, what the RBA does each day in the money and fx markets and how this flows through to borrowing rates and mortgage rates.”

I’m told there are over 120 pre-registered attendees, and representatives from the media will also be present. Sounds great!

If you would like to be kept up to date, from 7:30am (Adelaide time) I will be providing live updates throughout the seminar, via this blog post. So check back or refresh your browsers to receive the latest version.

Also, you can contact me during the event via email andy@forbessa.com, or by posting comments on this page.

7:30 – It’s always nice to attend an event at the wine centre. Here’s the room where the seminar will be held. People are having coffee and tea in the room behind, ahead of Guy taking the stage. 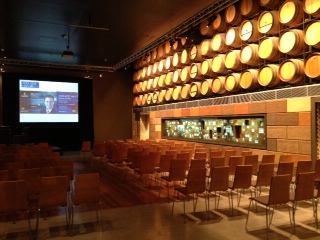 7:35 – People on their way in, again, awesome event environment. 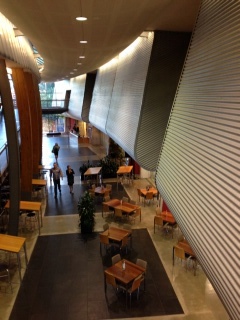 8:01 – Seminar is starting. Damian Scanlon, the Director of Adelaide University’s MBA Program is doing the introduction. He makes an interesting point that the people making the decisions often do so with the paradigms of their youth.

8:10 – He’s talking about how the Financial Markets section of the RBA bank achieves the cash rate set by the RBA when it announces an interest rate change.

8:11 – RBA has complete control in the supply of money between the Banks, and this determines the cash rate. The RBA does this in response to demand and supply. The RBA Bank is the only supplier.

8:12 – The Government also works with the RBA. For example when you pay your taxes the money comes into the government’s bank account at the RBA bank.

8:13 – The daily money market that the RBA uses to control the cash rate is only about a billion dollars in size.

8:15 – Dr Debelle makes the point that the cash deposit rate at banks, are higher than they used to be, because the GFC resulted in a refocus on sources of money that are deemed more secure.

8:20 – A snap of Dr Debelle talking. There are a number of professional photographers here, but you’ll have to suffice with my grainy iPhone5 shot! 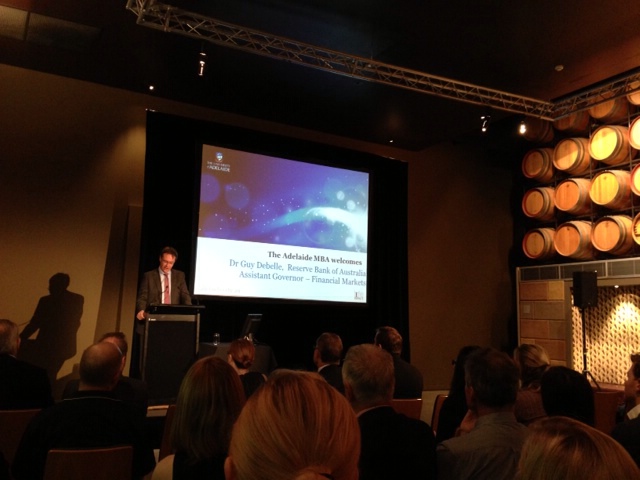 8:24 – He says that the RBA bank runs 24 hour trading, with the help of international offices such as New York.

8:26 – When does the RBA intervene to correct the Australian dollar or inject liquidity into the market? The last example was during the GFC (2008/09, 3.8billion in reserves). Guy says that in this case the RBA was happy to deprecate the dollar, however they were most concerned with the rate of the deprecation. If no one is trading then the RBA gets involved to keep the market moving.

8:27 – Interestingly, Dr Debelle states that during this uncertainty the RBA actually made money, to the benefit of the tax payers. They bought AUD low, and sold it high. No one else was willing to take that risk.

8:30 – The RBA bank thinks that the Australian dollar is valued on the high side.

8:30 – Why ? The primary reason being higher is basically the weak state of other countries economies. He’s talking about how the QE programs across the globe results in capital outflows from those countries. In the case of America, this depreciates the USD, and drives the AUD higher.

8:31 – A small amount of capital outflow from the US’s perspective can be very large for a country such as Australia.

8:33 – This can leave countries receiving these inflows with a difficult choice. One response is to lower the interest rate locally. But then, this creates asset bubbles such as housing booms. There are a number of countries having this problem now.

8:35 – In Australia the RBA bank has also taken the option of lowing interest rates. He maintains that we still have capacity to lower rates should the need arise, such as in response to the high AUD exchange rate.

8:36 – However, the recent easing cycle has not successfully lowered the AUD, which is the normally expected outcome.

8:37 – We are currently enjoying one of the lowest mortgage rates we have had in the past 40 years.

8:39 – Dr Guy Debelle winds up his talk by making a brief point that it will be interesting to see how Japan’s attempts to lower the yen will play out, relative to Australia.

Q: The Aussie is higher, what level would you intervene?

A: It would depend on the context. Guy states that it’s a common misconception that the RBA has limited power to influence the rising dollar. He says that, if the currency is rising there it is easy for the RBA bank to intervene. It is harder to do so when the currency is falling. This is because they only have 36 billion dollars in foreign currency to fight with.

Q: An interesting question from the audience, asking whether the system is too complex to successfully intervene in, creating booms and busts. Perhaps then, we’d all be better off if the RBA just went to the beach instead? Has anyone tried this?

A: Guy responds by saying that the GFC was largely caused by unfettered markets. So a lack of intervention can contribute to these kinds of severe effects. The RBA does what it is doing because of things like the Great Depression. The social costs of going through another depression like that is extreme and should be avoided.

Q: A question about the Swiss monetary policy. What are the costs of this?

A: They had interest rates at zero, high inflation. They have a large amount in foreign exchange, to cap the rise in their currency. It may work out without problem.

Q: What situation would prompt the RBA to intervene or cap the Aussie dollar?

A: Dr Debelle says that they are not in that position. There is scope to offset rises using regular conventional policy. Unlike the Swiss bank, where the interest rates were zero, we still have room to move.

A: The simple reason is that up until very recently, the Chinese didn’t let you.

Q: Should the Euro break up? What needs to happen to maintain the Euro as a viable currency?

A: Breaking a currency up is very difficult. Incredibly difficult to actually try to break it up. Whether the politics makes sense or not, the logistics would be very difficult. He says that it is important to remember the Euro is not just a economic beast, it is also a political beast. So even if it makes sense, it has this political glue to keep it together.

Q: Is there a capacity to forgive debt?

A: Greece has already had some debt write-downs. So that can happen.

Q: What are the impacts of the uncertainty in Europe here?

A: Well, the effects in Europe aren’t too significant here. Obviously, the markets panic when there is uncertainty, so if that could be avoided that would be good. But from an Australian perspective, the impacts aren’t significant.

8:58 – The seminar has just finished. People including me are now on their way back to work. Great event, very informative and it was interest to see Guy’s response to the trickier questions about when and how the RBA bank would intervene, if it would.

Thanks, and any questions or comments hit me up below!